Have you ever thought that by maintaining a healthy lawn, you would be helping to combat the effects of Global Climate Change or at the very least help to improve the urban climate of your immediate neighbourhood? Turfgrass has several environmental benefits which help guide our company’s vision; that we see a long-lasting connection between greener lawns, healthier people and stronger communities.

Turfgrass acts as nature’s air conditioner as it controls the surrounding climate. On the contrary, dark surfaces such as roofs and streets, absorb significantly more solar radiation. In turn, releasing heat into the air slowly, which causes urban concentrations of roads and buildings to produce heat more than suburban and rural areas. This phenomenon is widely known as the ‘urban heat island effect’ which is further demonstrated by the image below. The US Environmental Protection Agency notes that heat islands can affect communities by increasing summertime peak energy demand, air conditioning costs, air pollution and greenhouse gas emissions, heat-related illness and mortality, as well as water quality.

Another major reason turfgrass helps combat against Global Climate Change is due to the lack of evapotranspiration in city centers. Evapotranspiration is the process by which water is transferred from the land to the atmosphere by evaporation from the soil and other surfaces and by transpiration from plants. Due to lack of vegetation in urban areas, cities also lose the shade and cooling effect of turf and trees, thus, the removal of carbon dioxide. Rural regions have larger evapotranspiration rates as open spaces reflect solar energy. Cities have less evapotranspiration and the buildings trap solar radiation. Vegetation’s life cycle inheritably cools its surrounding area. In areas of turfgrass, water can either pool and evaporate slowly, or be used by plants and transpired by them. Both of these processes create a cooling effect. When water evaporates it takes heat energy away from the surrounding air and multiplies the cooling impact.

The colour, material and structure of a surface determines its ability to absorb and release heat. For example, concrete, asphalt, bricks and wood absorb heat very quickly during the day while water, grass, and trees absorb heat slowly. At night, the non-vegetative surfaces lose their heat quickly and the vegetative surfaces slowly. This results in the increase in temperature in the city while areas of turfgrass remain cool. In fact, turf on 8 average-sized healthy front lawns has the cooling effect of 70 tons of air conditioning, enough for 16 average homes.

Making greener choices for our environment is now more important than ever, as we see continuous growth in urban areas. Even one healthy lawn on each street in your neighbourhood will make a difference in the wellbeing of all the people living there. Why not make it your neighbourhood? 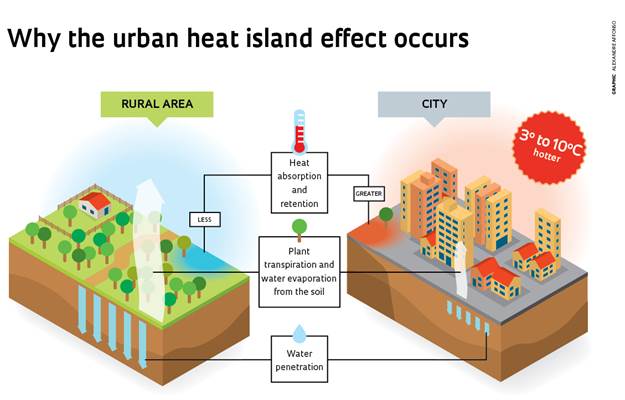